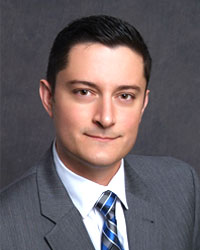 Mr. Muller’s main practice area is complex commercial litigation. At Stone & Magnanini, Mr. Muller has represented firm clients in matters involving tax and intellectual property issues, insurance fraud, contract disputes, and violations of the False Claims Act. Prior to joining Stone & Magnanini, Mr. Muller was associated with Norris McLaughlin & Marcus, P.A., where he was actively engaged in representing businesses large and small in litigation; appeared “on the brief” for a published decision before the New Jersey Supreme Court; was part of a trial team that represented a major firm client in an intellectual property dispute through a successful federal jury trial; and assisted multiple parties on both the plaintiff and defense side of business divorces. In addition, Mr. Muller has assisted in the counseling of clients on complex matters dealing with contractual, employment, and white-collar criminal issues.

Mr. Muller served as a law clerk to the Honorable Anthony J. Parrillo of the Superior Court of New Jersey, Appellate Division (2009 – 2010).

Panelist, “Be Careful Who You ‘Like:’ Ethical and Legal Implications of Social Media in the Workplace,” Seton Hall Law School, February 5, 2012.

Panelist, “From Crisis to Catharsis: Cybersecurity and Legal Measures to Respond to, Remediate, and Prevent Data Breaches,” The Masters Conference, Washington D.C., October 2011.

*The New Jersey Super Lawyers Rising Stars list is published by Thomson Reuters; its selection methodology can be found at http://www.superlawyers.com/about/selection_process.html. No aspect of this advertisement has been approved by the Supreme Court of New Jersey.